The fence is located on one of the most historically significant lots- not only is it the site of the first burial, but it is surrounded by the last remaining piece of decorative cast iron fencing in Newton Cemetery. The lot was purchased by Orrin and Emeline Whipple when their daughter, Jessie Annie, died of cholera infantum at 3 months old. Her remains were buried in October 1856, the very first burial at Newton Cemetery. Two of her brothers also died as infants, and are buried beside her. Orrin died nearly a year later at 2 months old of the same disease, and Willie lived for only 12 hours when he was born in 1861.

While the fence surrounds the first burial, it is likely that it was put into place years later. Even so, as the last remaining fence of any kind at Newton Cemetery it is an important feature of landscape and commemoration history. Currently, the lot is a regular stop on history tours that are given both publicly and privately.

The fence is representative of a “fashion” popular in the history of garden-style cemeteries like Newton. Blanche Linden-Ward notes in “Silent City on a Hill” that early cemeteries used iron fences to protect monuments on family lots from grazing animals, but the use of fences to enclose family lots was also part of a Victorian-era movement around the “domestication“ of death. This movement saw the beliefs and customs around death and the after-life become more sentimentalized rather than feared, even to the point of using family lots in the new garden-style cemeteries as outdoor “rooms” where family and friends could gather. It was not unusual to see cast iron furniture set on a lot for just that purpose. The features of this particular cast iron fence, while common, are also representative of cemetery iconography popular since Grecian times, but brought into heavy rotation by the Victorian-era sentimentalization of death.

The fence is comprised of ten sections that are made of fluted posts, rails and decorative medallions that depict a traditional cemetery theme of the era. Before restoration, the iron was extremely corroded with rust covering 90% of the surface. The original paint had deteriorated significantly, biological growth was readily visible, the fence had come off the granite foundations.

The Whipple-Beal fence, and Newton Cemetery, represent an irreplaceable cultural element with great educational and research value. The Friends of Newton Cemetery is grateful that the visual evidence of this past custom was saved. 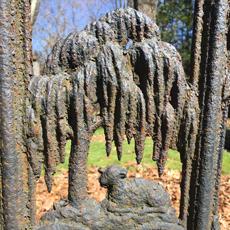 The willow tree symbolizes sorrow or mourning. On this fence, the tree can be interpreted as God’s protection for the lamb (child) which is sitting underneath.

In the Christian religion, the lamb represents Christ, the Redeemer. Lambs also represented innocence and virtue. The fact that there are three small children buried here makes these symbols completely appropriate. 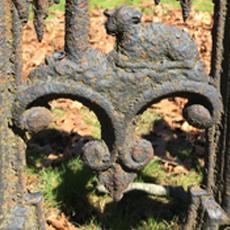 The lamb sits atop a fleur-de-lis which represents the mother. 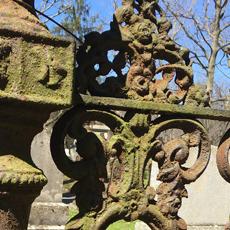 Flowers in general, represent the fragility of life, the rose for innocence. 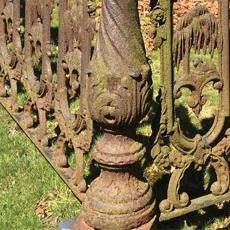 The acanthus leaves seen at the bottom of the corner posts are one of the most popular symbols seen in cemeteries, representing the Heavenly garden awaiting the deceased.